By Hazel and Joe Mattingly

Ground for the Eureka School was deeded to Luce Township, Spencer County, Indiana, in two parcels, the first by William Brisco in 1869 and an additional parcel by Elbert L. Johnson in 1883, in all one and one-half acres, and a two-room frame building was erected on this acreage.

One acre of ground for the Hatfield school was deeded to Thomas Lang, trustee, by Annie Woodruff on July 17, 1875, and a two-room frame building was erected at this time, to which another room was later added.

But there were schools in the township long before these dates.  My grandmother, Sarah Ann Shook, who was born in 1845, attended school somewhere in Eureka.  The late J. B. Mattingley thought it stood where the residence of Ollie Deeg is now located.  And J. Ford Wilkinson says his mother, Dora Jones Wilkinson, taught school in 1873 in a small log cabin on the bluff north of Enterprise on property now owned by Bryan Wilkinson called “The Holy Land”.  Old Independence was on the Frank Miller farm now owned by Thomas Miller and this building was standing until last fall.  Old California stood on land now owned by Thomas Stevenson just south of the Rockport-Eureka road.  Both Old Independence and old California were abandoned when new schools bearing the same name were established elsewhere.

In 1904 there were thirteen one-room schools scattered around the township numbered One to Thirteen though most of them were named—Enterprise, Taylorsport, California, Independence, Nunn, Kinderville, Graff, Hedrick, Ebenezer, Carter and Crowder, the school west of Eureka was simply known as Number Nine and the negro school located at Kensington near where Luce Elementary School is now located was known as Number Twelve.

Many of our ancestors taught in these one-room schools—Dan Deeg and May Ashby Deeg, his wife, J. B. Mattingley, John McCoy, Minnie Shook Crowder, Nellier Shook Oskins, Alice Kirkland Tuttle, Dora Jones Wilkinson, Lottie Mattingley Wilkinson, Jose Kirkland Thrailkill, Del Boyd and Lida Crooks Boyd, his wife, Louie (Dooge) Crooks, Walker Littlepage, F. R. Glenn, John Atchison, Ida Stowers and Anna Herman, to name a few who have passed on to their reward, though there were many, many others, some of whom are living today.  In spite of having so many grades to teach and only six months of the year in which to do it, these dedicated people managed to give their students a solid foundation in the eight basic subjects.

The two-room frame building at Eureka was replaced by a four-room brick building in 1904 when F. H. Crowder was trustee, and the old building was moved approximately the length of a long city block in a northwesternly direction to serve as the Negro school which had been located at Kensington.  John Haines and Ben Johnson were the teachers in this school and it functioned for many yars, until there were so few pupils it was discontinued and the pupils transported to Rockport.

One by one, the little one-room schools were discontinued and the students transported to one of the larger schools in the township by horse or mule-drawn covered wagons.  Taylorsport, which stood on land now owned by Morgan Stevenson and which building is still standing, was the first to go and the students were transported to Eureka in a covered wagon driven by Henry Fulks who lived in Eureka at the time.  This wagon was nicknamed by Hudson (Doodle) Lawburgh “The Hoodoo Wagon” and the name stuck at least in the Eureka-Hatfield districts; all wagons transporting pupils were called “Hoodoo Wagons” by one and all.  Among the pupils transported from Taylorsport were Roy Mattingley Deeg, Hallie Stewart Abshier, Lena O’Conner (married name unknown) and Charlie Monks.  This was about 1906.  Since the capacity of these wagons was necessarily limited to twelve or fifteen, there were a large number in use and many, many people, at one time or another, drove Hoodoo Wagons—Lester Polk, Fid Pattie, Press Jones, Joe Collins, Lou Herrell, Doug Hall, Noah Lampkins, Ed Wilkinson, Roy Golliday and John Kirkland to name a few.  This form of transportation was used until about the 1932-33 school year when motor busses replaced the covered wagons.  During the era of the Hoodoo Wagon students went to high school by way of the E. & O. V. traction line and each family was responsible for getting it’s own children to and from the traction stations; some erected small buildings to protect the children from inclement weather while waiting for the traction car.

The follow pictures were taken on the steps of the new school building at Eureka in 1904.  Picture Number One is of the teachers of the township who were holding their Teachers Institute in Eureka on that day, and are as follows: 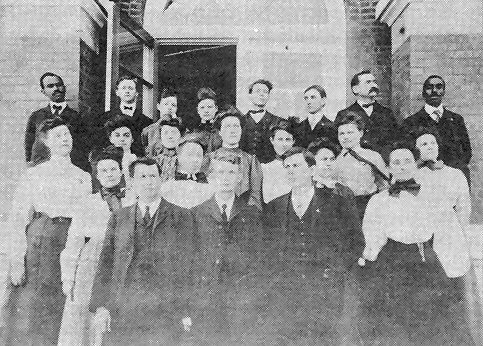 Picture Number Two is of the Baptist Church Ladies’ Aid who cooked and served the noon meal for the Teachers Institute and they are as follows: 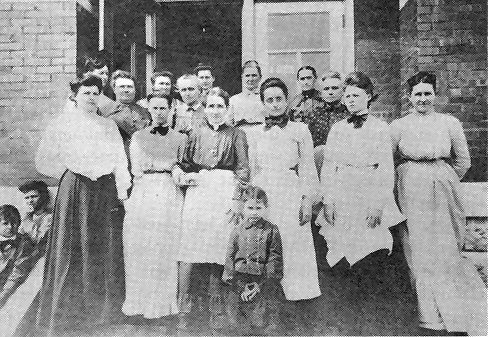 This building burned during the 1918-19 school year and another four-room brick building was erected on the same location which is now owned by Jerry Riggs.

About 1914 the three-room Hatfield school was moved from its location on what is now State Highway 66 and which is now owned by Sam Horn, to a new four-room brick building in north Hatfield which had been erected on land purchased from William Middleton.  Reuben Lloyd was one of the teachers who taught there the first year.  Helen Morris remembers that they simply walked, carrying their books, from the old school to the new.  That must have come under the heading of good clean fun.

Hatfield and Eureka Schools continued to function separately until about the 1960-61 school year when they combined as one school, some grades being held at Hatfield, some at Eureka.

In January of 1962 school opened in the new Luce Elementary School building located at Kensington and accommodated all the children in Luce Township in grades one through six.  Grades seven and eight went to Richland in the old grade building adjacent to Luce Township High School.

In 1965 South Spencer School Corporation was formed consisting of Luce and Ohio Townships and approximately half of Hammond, with grades ten, eleven, and twelve going to Rockport where there were new facilities.  The junior high students, consisting of grades eight, nine, and ten were divided between Rockport and Richland (actually grades seven, eight, and nine were divided - Ed.).  Grades one through six were divided between Rockport Elementary and Luce Elementary schools.